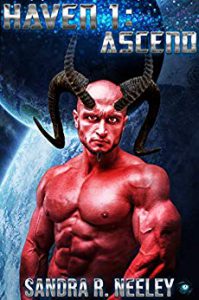 Command Warship 1 is home to one of the most feared males in the multi-verse. Zha Quin Tha is Sire to his people, next in line to the throne. He rules his military with an iron hand. His people, the Cruestaci, are a warrior race who bow to no one and no thing. They’ve been deemed too violent to be an ally by the Unified Consortium Defense — the organization responsible for keeping peace between all peoples and worlds. Zha Quin didn’t care what their opinion was. He was only violent when necessary — like when provoked, or if his planet was threatened, or a weaker people overrun, or he was just irritated in general. Like now, slavers had crossed into the territory of Cruestace. He’d been called in to intercept and process the kidnapped women on board to the Consortium for return to their home worlds. Little did he know, his whole existence was about to be turned upside down. One little, human female was about to teach him a thing or two about survival, patience, and trust.

One large room — every wall, the entire floor, even the ceiling covered in mats. This is now Vivian’s home. Her world extends no further than the end of the chain that keeps her anchored in the center of the room. She’s learned how to use that chain as a weapon. She had to — her captors find great sport in taunting her, abusing her, hurting her. She’s exhausted, nearly starved, injured and if truth be told — not long for this world, whatever the hell world it is. All she’s got left is her pride, and she’ll be damned if she gives that up to any of her alien captors. They want to play — she’ll play — and she’ll make sure they pay for it in bruises and pain the next day. They may win, but they’ll think twice next time. Days run together, no hope of ever being freed. Survival seems pointless, until she finds herself face to face with the largest, scariest male she’s ever seen. So be it — she’s got nothing to lose — she’ll fight him, too. Maybe this time her misery will finally come to an end. She has no idea this male is different. This male is stronger than the rest. This male will be her Haven.

Warning: Intended for mature audiences. This book contains violence, abuse both real and inferred, and sexual situations that may be disturbing for some readers. If you are offended by these subjects, please do not buy this book.

This book held my interest from start to finish and I quickly became invested in the main characters, the story, and the world building. There were many times throughout the book, I found myself thinking ‘this is so good’! The writing was excellent and I could hardly put the Kindle down. I loved Kitty and the way Quin indulged Vivian and treated her with love and concern. The fact that he was much older than Vivian didn’t hinder my enjoyment of the story.

When you are reading science fiction or fantasy, fiction of any kind really, the reader needs to make a willing suspension of disbelief at times to buy into the story. My pet peeves with alien romances include seven foot aliens mating with “tiny” females barely over five feet. Then there are the horns. How does a guy with horns sticking out past the back of his head lay down or sleep? Yet in the story Quinn does indeed lay on his back in bed with Vivian on top of him. Did that stop me from enjoying the story? Absolutely not! I made a simple suspension of disbelief. To me, the story was that good.

As a writer and indie author, there were many times that I wished that I had written something this good. While some of the critical reviews found the characters one dimensional, I found them just the opposite, because Ms. Neeley did the one thing that writers are always told to do—show by their actions and what they say rather than tell.

This is my first read by this author, and I will be looking at some of her other works as well. I am looking forward to more of this series as well.