I spent years writing and polishing my Aledan series and creating the Aledan universe. The heroine Michelle “Chelle” Marlow is living in the ruins of the fictional city of Farringay on an Earth devastated by alien interstellar war. Cyborgs were made to fight wars.

Even though I used a number of the same tropes familiar to cyborg romances, I wanted it to be different than the others. Some cyborg series have them escaping misguided natural humans who want to destroy them once the war is over. They seemed to forget that even though the cyborgs are genetically and cybernetically enhanced, they are also human beings.

Some series have cyborgs that are more machine than human. Naomi Lucas’ cyborg shifters are enhanced with animal DNA. Marie Dry’s cyborgs were aliens.

“Can’t find Mr. Right? Why not create him?
MedAct is the company that can make all your dreams come true! Just give them a call and let them create the perfect man for you. But remember, you can never give him up. It will kill him, literally.”

Only they don’t all die. Some go rogue, and some go insane. Something sinister is going on at MedAct, but no spoilers here. I really enjoyed this series and devoured each of them almost as soon as they were released.

In my series, the cyborgs start out being treated like property, but when the public learned that they were created from human embryos, they demanded human rights for the cyborgs. After that, they were committed to a finite length of service and freed.

Befriended by a Federation Spacefleet admiral, Vyken Dark is encouraged to go back to post-apocalyptic Earth after the war instead of going to live in the cyborg colony on a world called Phantom. Because of his unique relationship with the Admiral, Vyken wants to grant his friend’s dying wish. There is a group called the Civil Restoration Enclave, trying to rebuild a pocket of civilization just south of Chicago in the former cyborg production facility.

There he finds his female, the one female he can sire offspring with. Vyken later believes the Admiral convinced him to go back to Earth because the gene pool there would most likely have produced his female. That does happen for him, but Vyken also discovers thousands of cyborgs still in stasis at the facility.

In some respects, it’s kind of like the wild west, and the cyborgs are the new lawmen in town. Or the Vikings of the future, ruthless warriors bred and conditioned kill with abandon until there are no more enemies to kill. What’s a cyborg to do when the killing stops?

To keep them motivated, they are promised they will find their genetic mate to breed and make a family, to love and be loved. While I never actually said as much in the story, I am pretty sure Vyken Dark didn’t really believe in that fairy tale.

When he finds her, he is sexually attracted to her, but he doesn’t quite know how to translate his attraction to her into a relationship. Most courtship customs have been forgotten in post-apocalyptic Chicago. However, Danya’s father, introduced in the Cyborg Awakenings Prequel, came from a family that valued books and reading. He collected books wherever he found them and taught her mother to read as well as Danya.

While Danya never had a real romance, she had read about romance, so she knew that dating was mainly about spending time with a prospective mate. My whole Cyborg Awakening series is a prequel to the Aledan series.

So why do I now have Clarissa Lake as the lead writer for the series now? I am retired from my day job with a modest retirement income that allows me to write and publish but the return on the hours invested would make pathetic wages. I plan to write some shorter stories based on both series next year and plot some longer works in the Cyborg Awakening Series with Clarissa. There may be a box set of Cyborg Awakenings in the Future.

After a reader complained in a review that my box set was poorly edited, I went back an re-edited almost 1500 pages with Grammarly©. This was after I had edited and proofed each book in the series up to six times.

Just to be clear, I am an author and publisher, editor, proof reader, and marketer. After several years and dozens of rejection slips, I gave up ever getting my two books published traditionally.  Then, I got a Kindle because I love to read almost as much as I love to write. I also have a small house and nowhere to store the 400+ books I now have on my Kindle.

Even more exciting than that, I discovered KDP – Kindle Direct Publishing! Soon after that, I published The Aledan Psion with a truly horrible cover. It barely sold until a fellow writer helped me rebrand the series with all new covers.

I’m in a “catch 22” situation. I’ve had readers complain about editing in their reviews—been told to get an editor. While I would probably sell more books if the editing were better, I don’t make enough money to pay for even a low priced copy editor. It would cost several hundred dollars per book.

So, against professional advice, I self edit by editing tools like Grammarly© and Pro Writing Aid© in addition to a text to voice program that reads the manuscript aloud while I follow along. It lets me hear typos or missing words that I might not see. I calculated the cost of a copy editor for the 1500+ pages in the box set at: $4,500.

None of it is fool proof. This is why my books are generally priced at $2.99 and available in KU. The box set is only $3.99 for all 6 books and the prequel.  However, if you find too many mistakes that detract from your reading experience, my email address is in every book. Let me know and I will review it and send you a corrected copy FREE.

Anyone who sends me a list of errors and their locations will get the choice of a free ebook on my list. If you aren’t sure you will like the story, The Aledan PSION is free on Amazon in the US and Smashwords elsewhere.

I have been collaborating with Clarissa Lake for some time now, and having finished my Aledan Series, I am turning over the Cyborg Awakening Series to her as lead writer. I will have input on the story line and work one edits.

2019 marks my third year of retirement. Since my most prominent memories of 2018 were of a lot of work, I’ve decided to cut back this year and take time to enjoy other things.

I will take the time to read other authors’ science fiction romance and blog reviews on my new website http://christinemyers.authors.zone. I will also be doing ARC reads and some Beta reading and perhaps publish some shorter works based on my current series.

I will only be sending out my newsletter once a month with all other updates my website and social media.

In an attempt to expand interest  in my Aledan Series and hopefully gain some more positive reviews, I am offering free E-copies of Psion Factor January 4-5. 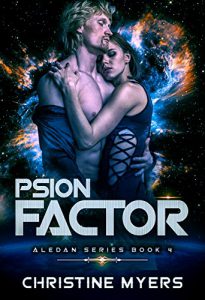